Hotep is a word that means “peace” or “satisfaction” and many other things. Hotep Nation is a group of people looking to restore integrity to the term “hotep” as it has been smeared by left-wing black media and the likes. Hotep Nation is about self-empowerment and self-accountability. Independence.

For the most part, it is tough love. We want better for our black cousins and believe in their potential. It’s like a parent’s criticism of a child who will not push to reach their potential but instead chooses a path of excuses and complacency.

Are the Hoteps Democrats or Republicans?

Hotep Nation is opposed to the Democratic party. That’s not to say that Hoteps are Republican, however. The Hotep ideals align much more closely with Conservatives than they do Liberals.

The Hoteps do not have a leader. Each Hotep is a leader in their own right. Black movements of the past failed because they place emphasis on one leader who can be targeted. Once that leader is dead, the movement dies too. The Hoteps will not make the same mistake.

There are many Hotep women. They are vital to the Hotep movement. You will often hear a Hotep man say, “the black woman is God”. Therefore admitting the important role of the female Hotep.

Do you guys hate women?

Of course not. See the answer above.

Do you hate gays?

We do not hate gays and there are gay Hoteps, believe it or not. We simply recognize that there is a deliberate agenda to break up the black family and one way to do so is to emasculate the black man. See the work of Neely Fuller and Dr. Frances Cress Welsing.

Why don’t you guys practice feminism?

Feminism is a social construct created by the oligarchies to start gender wars for the purpose of breaking the nuclear family structure. Divide and conquer. On blacklivesmatter.com, under the Black Villages section, they clearly state they want to break up the nuclear family.

Why do you say there’s no racism?

In the movie “The Great Debaters” the inspirational dialogue goes:

Who’s your opponent?
He doesn’t exist!
Why does he not exist?
Because he is merely a dissenting voice to the truth I speak!

We recognize racism as a hurdle or distraction but will not allow it to hinder us, by simply removing it as a fear in our minds. This is a psychological strategy.

Can white people be Hotep? Can Christians? Can Muslims?

Anyone can join Hotep. There are no racial or religious barriers but the goal is to uplight the black community across the globe since it is the most abused & oppressed, especially on the South American and African continent. We are religious tolerant. 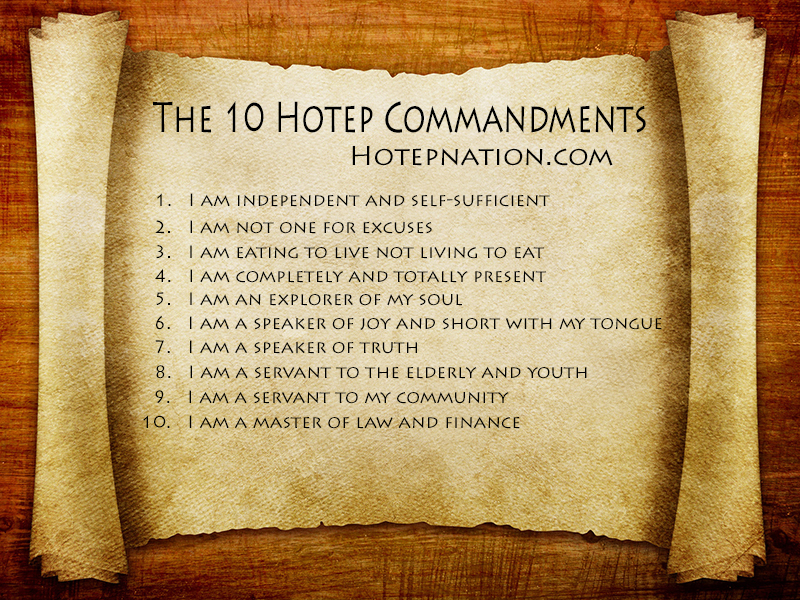 What is the goal for Hotep Nation?

“Prosperity at any cost. Independence by any means”

We focus on economics by pushing citizens to develop new skills and start businesses. We believe that we need to shift the black community from being habitual consumers to becoming habitual producers, that way we can build a strong economic base.

We also seek to instill a better diet as blacks suffer from many illnesses, incomparable to any other group of people, like heart disease, diabetes, and cancer.

Lastly, we believe in exercising our spirituality faculties above and beyond structured religions.

What is the relation between Hotep and Egypt?

The term Hotep stems from Ancient Egypt (Kemet or KMT). Often people will say that this is the only thing Hoteps talk about and that is not true. Hoteps do recognize the dynasties of West Africa like the Empire of Mali and other notable royalty like Queen Nzinga of Ndongo (Angola). We recognize the history of all groups of African people across all seven continents.

Egypt happens to be one of the Seven Wonders of the world. The architecture is unparalleled and even modern technology cannot duplicate it. It is the birthplace of Greek Philosophy, mathematics, language, science, and monotheism. We believe that it is sacred to our history.

Many blacks complain when whites are portrayed as royalty in Ancient Egyptian movies. They may call this cultural appropriation. But if you do not claim your own history, expect someone else to, and they will create economics around it.

Are all of you guys vegan/vegetarian?

Not all. You will find many that are advocates of that lifestyle. Many are also transitioning to this diet as well. But you may come across some that participate in meat consumption. We only ask that you become conscious of what you eat.

How do I join?

Tap here to join Hotep Nation and access our private chat – the fastest growing group on the internet. If you’re on Twitter, add HOTEP to your display name and/or bio so we can recognize you and welcome you to our growing group of productive Hoteps.

Is this a religious sect?

This is NOT a religious sect although at times it can appear like one. Some Hoteps shun western religion and some even shun Islam. It depends on which Hotep you talk to. Again, Hotep Nation is not monolithic.

Why do Hoteps disagree with Black Lives Matter?

Black Lives Matter wishes to appeal to the moral nature of a people who have shown no signs of having a moral compass. Hoteps believe this is asinine. Black Lives Matter would rather complain about the damage the “white man” has done to their communities instead of fixing the issues themselves.

BLM wishes to protest while Hoteps believe in capitalism, although we support your right to protest.

BLM will not acknowledge the black on black crime in the community while Hoteps do.

BLM does not believe that black economics will cure many of the black community’s problems and Hoteps have reason to believe otherwise.

There has been a deliberate smear campaign against Hoteps, led by liberals, which you can see if you Google “hotep”, so naturally there will be a conflict between the groups because of this. Criticism is okay but slander is obviously unnecessary.

In a 1999 trial, the United States government was found guilty of conspiracy to murder Martin Luther King Jr. Why would you want a government that does that to your leaders having a hand in your community? That is counter-intuitive. We need not go into the infiltration of the Black Panther Party by the FBI. BLM will admit that the government is corrupt but in the same breath ask for government assistance.

We believe that BLM is a group that is propped up by the same oligarchy that BLM claims oppress them, therefore we cannot support it. In short, BLM is a Trojan Horse to black power, propped up by billionaires like George Soros through his Open Society organization. If you follow the money trail, you’ll be able to connect the dots.

Again, Hoteps are not monolithic. Many may fall under the category of a conspiracy theorist but we believe that if you’re not theorizing, then you are NOT THINKING FOR YOURSELF. To not theorize means to take the mainstream media narrative as fact without any further investigation. Hoteps believe that you should question the validity of EVERYTHING and do your own independent research. To NOT be a conspiracy theorist is to have a mentally dead outlook on your society.

It might. But that is not always the case. Are pro-animal rights, anti-human rights? Can you see now how ridiculous this question is?

Black Lives Matter and other left-wing socialist liberal groups certainly appear to be. As for Hotep Nation, we are NOT anti-white.

Do any of the Hoteps own businesses?

Again, it is a part of our main goal to be PRODUCERS so yes, there are many business owners in the Hotep community. We will publish a list in the future and update this page to link it there.

What does Hotep do for the community?

Our beloved supporters have pledged at least $5/month to Hotep Nation via our Patreon account. Do you love the message we spread? Help it reach more people – donate at least $1/mo now!